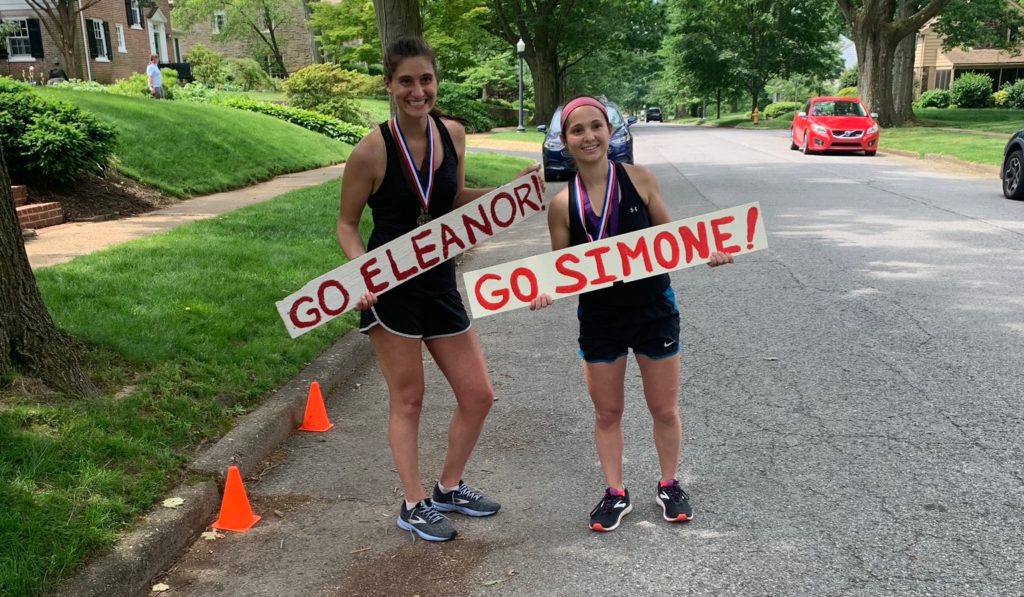 When COVID-19 hit and we were all sent into quarantine, Simone Veale decided that now is a better time than ever to run a marathon. A Wilmington Friends graduate who now plays field hockey for Williams College in Massachusetts, Veale found herself with plenty of extra free time when colleges closed down and sent students back home. On June 3rd, her 21st birthday, Veale completed 26.2 miles alongside her longtime friend, Eleanor Napoli.

Below, we catch up with this longterm patient to ask her about this accomplishment, her training leading up to it, quarantine life, and her experience as a patient with Elite PT.

Eleanor Napoli ran a marathon for her 21st birthday last May; did that inspire you to do the same for your 21st?

I have a friend at Williams who ran 21 miles on his 21st birthday, so that is actually where I got the original 21 for 21 idea. Once we realized our weekly mileage was steadily increasing, I asked Eleanor if she would be up for a marathon instead of the 21. I was inspired to change from 21 to 26.2 partially because Eleanor told me how great it was to run on on her 21st birthday, but also because I really wanted to push my body and see what it could do. Eleanor has now run 5 marathons, so she certainly inspired me to go for my first.

What was your training like leading up to the marathon? When did your interest in running begin?

Eleanor and I have always been runners. Eleanor ran cross country in high school, and both of us have always had a love for distance running outside of organized sports. Eleanor obviously has a very solid background of marathon running, and I have had an interest in distance running in my off-seasons from field hockey. I was originally supposed to run my third half marathon in March, so our training kind of piggybacked off of that training. We had about 12 weeks from when I came home and we ran the marathon. We started at around 60 miles per week and peaked around 80. We peaked our long run at 22 miles and then did a 1.5-week taper.

The marathon is one of the most mentally challenging athletic feats. Did you hit a “wall” at any point? Can you put into words what it is like to battle through the self-doubt that emerges in times of physical stress?

Honestly, it is hard for me to decipher whether I hit a wall during the marathon or whether I was experiencing heat exhaustion. The marathon, unfortunately, was on the hottest day of the year so far, and we did not train in the heat at all. As a result, pretty early on I felt heat exhaustion kicking in. Within the first hour or so of the run, it was already about 80 degrees, which was really tough because our 22-mile run was about 50 degrees. I honestly felt the self-doubt really early on, and it was Eleanor who pulled me through it. There was never a time when I thought I would not finish, but I really leaned on her to talk me through it. There was a point where my body really wanted me to give up and I felt myself getting quite dizzy. I looked at Eleanor and told her that I really did not feel well. She asked me what I wanted to do, and I responded “finish” and she said, “alright let’s do it.” From that point on we just kept saying one mile at a time and we made it work. I also have to give a shout out to our family and friends who provided MANY water stops along the way. I would not have made it through without that.

Do you plan on running any more marathons in the future?

Yes! I am already looking forward to the next one. I know we could have gone a lot faster in different weather conditions, so I am very excited to see how my next one goes! Eleanor has 2 more scheduled for the fall, so I am also really excited to see how well she does.

It goes without saying that quarantine has completely disrupted everyone’s daily routines, causing a lot of people to feel down and lost. Instead of taking to Netflix and binge-watching multiple television shows, you chose to train for a marathon. What inspired you to spend your time working towards such a big goal?

I will admit that quarantine has also included quite a bit of Netflix binge-watching. Truthfully we just wanted to get outside and enjoy the time together. We used our running as a healthy outlet and to escape from being inside all day doing school work (and Netflix). We started running to just stay in shape and have some sort of social time outside of our families, and we gradually started running for longer and longer. As quarantine went on and we began to lose more things (like Eleanor not going back to school for her senior spring/season, Eleanor’s summer job in Africa being canceled, my summer research got canceled, etc) we wanted to channel our running into something that would make both of us proud.

What advice would you give to other athletes struggling to stay motivated during these trying times?

I would say don’t be too hard on yourself and try to get someone to workout with you. There were some days when one of us wouldn’t have the best workout and we just had to remind each other that we are living in a pandemic. We are doing our best to stay active, and that is all that we can do. Whatever you have in you is enough. Also working out with another person helps so much.

Have you learned any lessons or gained any new perspectives due to the COVID-19 Pandemic?

The biggest thing is just not taking anything for granted. Eleanor and I both lost a lot this spring and summer, and it is possible we will lose more in the fall with my senior year and field hockey season. We took this time to live in the moment and we “control the controllable” (as my coach says). Everyone is going through something different right now with the pandemic, and we just learned to use every day as a way to improve ourselves even if it is different than we planned 6 months ago.

Describe how your experience with Elite PT and specifically your time spent with Mark.

Mark has been a lifesaver! I do not think I could have run this marathon without him. During my training, I came in every week to see him on Mondays post-Sunday long run. Usually, he would dry needle me and sometimes would do deep tissue or Graston as well. I was fortunate enough that I did not have any real injuries during training, but he helped me with whatever was hurting that week and made sure that nothing progressed to an injury.

When did you first become a patient at Elite PT?

I have been a patient I think since December 2017. I was a freshman in college and had hamstring tendonitis. That was the first time Mark used dry needling, and it was so helpful!

What do you value about Elite?

I can’t say enough good things about Elite. Every time I walk in to see Mark, even if nothing is really “wrong,” I feel so much better after. Also, I am a very curious person and I ask Mark a ton of questions about what he is doing and why. Mark is always so happy to teach me things about what he is doing, so I really like the fact that I usually learn something when I go to PT. Also, everyone who works there is fantastic. Walking in there every week especially during quarantine was so refreshing. Everyone was always smiling behind the masks, and generally, the PTs are quite goofy with each other which I love.

Posted in General, In the News